The Bible Framework Applied website is currently under construction.

The non-Bible Framework materials that were previously available on the Bible Framework website are now available here.
In the coming months we will be reorganizing and expanding the content on this complementary site. Updates on the progress of this new site will be via the quarterly Bible Framework newsletter.

If you find issues on this website, please let us know at .

You are here: Home / Newsletters / Publications

The following are published books written by or contributed to by Charles Clough. Other articles and writings may be found under the Essays and Articles menu.

by Ed Hindson and Thomas Ice; Endorsement (below) by Charles Clough

(Material for Chapters 5 and 11 comes from the Framework) 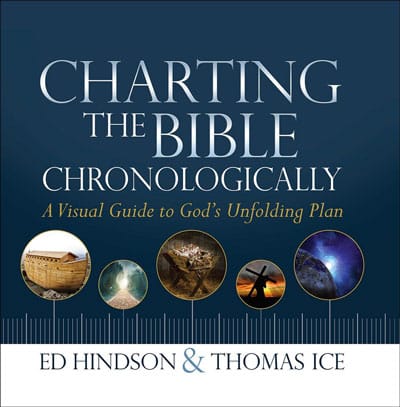 Dr. Tommy Ice has produced several books that depict biblical doctrines and events with concise explanations and artistic charts. In this recent publication (2016), Dr. Ice and his co-author, Dr. Hindson, provide readers with forty short, well-written chapters illustrating biblical concepts in their chronological sequence. They correctly point out that the Bible is unique among religious books because it is “rooted in past history” and “predicts future history.” The Bible is actually a sixty-six book library that reports on God’s coherent, verbal revelation through dozens of authors from widely varying social standings and a panorama of personal circumstances over two millennia. Together with its specific prophecies, many of which have already been precisely fulfilled, it depicts history as linear and teleological in utter contrast to ancient and modern paganism that is circular and meaningless.

Chapter 5 on the Divine Institutions uses material from the Framework to illustrate the created design of human society with its responsible labor, marriage, family, civil authority, and tribal diversity. Readers are thus reminded that these features of civilization are not mere “social constructs” as modern unbelief claims. Chapter 11 presents one of the powerful Framework evidences—the post-flood exponential decay curves of human longevity—that early Genesis historical narratives are to be taken literally, modern criticism to the contrary notwithstanding.

by Andrew Woods; Endorsement (below) by Charles Clough

Every student of the Word of God who honors a straightforward approach to the biblical text uncontaminated with post-modern language theory will treasure this work by Dr. Woods. The normal literal understanding of the Kingdom of God revealed through the Hebrew prophets of the Old Testament has faced increasing opposition by a wide array of evangelical scholars, writers, and social activists for the past several decades. Woods here provides us with the fruit of his many years of detailed examination of each such attempt to redefine the Kingdom of God to make it compatible with ecumenical “dialogues,” charismatic power evangelism, the prosperity gospel, lordship salvation, and political opposition to Israel. As a lawyer as well as a theologian, Woods takes his readers through a logically coherent defense of traditional dispensationalism’s view of Jesus’ coming Zion-centered, geophysical, political, and global reign over planet earth. He honors the God of verbal revelation Who has spoken over millennia with self-consistent integrity.

by Grant Hawley, editor; Endorsement (below) by Charles Clough

Bold Grace editor, Grant Hawley, has brought us a concise, clear exposition of Free Grace Theology. Laymen and Bible scholars alike will find it a handy reference for understanding this oft-misunderstood refinement of Protestant soteriology that advances the biblical distinction between justification and sanctification. Four authors discuss five subject areas where Wayne Grudem has recently claimed Free Grace Theology diminishes the gospel. I appreciated how each of the authors—all with actual ministerial experience—showed how distinguishing between initial salvation wholly of grace at conversion and subsequent sanctification involving works and rewards not only clarifies historically troublesome passages but also motivates godly living rather than hindering it as critics claim. Believers who are struggling to overcome deeply entrenched sin patterns will especially appreciate the empowerment that the assurance of God’s love provides.

Nazi Oaks: The Green Sacrifice of the Judeo Christian Worldview in the Holocaust

by Mark Musser; Endorsement (below) by Charles Clough

Mr. Musser exposes the powerful religious and philosophical undercurrents that are sweeping the “green” tsunami over our political landscape. In a day of sound-bite rhetoric and fund-raising memos obsessed with the latest scary story of alleged damage to “Mother Nature”, we often are too overwhelmed to see the flow from big ideas to big consequences. As one trained in modern environmental studies and experienced in actual environmental policy regulations, Musser ably deconstructs the Third Reich’s green connection—a sobering exhibit of what happens when ancient Baalist nature-worship coalesces with modern totalitarian bureaucracy. This is a lesson that biblical green “creation care” must learn or suffer the consequences of ignoring it.

by Joel Furches; Forward (below) by Charles Clough

The conflict of ideas between biblical faith and pagan culture has gone on for millennia and its core has remained largely unchanged. Either reality, truth, and ethics are as the Bible states, or they derive from the imaginings of finite, fallen man aided by the deceptions of principalities and powers of this world-order. In the Old Testament times of ancient Israel the revealed supernatural cosmogony of Genesis radically clashed with the pagan naturalistic cosmology as expressed in Enuma Elish and other pagan writings. The same conflict occurred in the early centuries of Church history between Christians and Roman pagans. It was renewed between the sola scriptura authority of Protestantism and the subjective anthropocentricity of the so-called Enlightenment. Finally it continues in the post-Darwinian era today between what remains of biblical Christianity and the New Atheism.

As Joel Furches states, the New Atheism is far more evangelistic than older classical atheism and often appears very intimidating to believers whose understanding of the Word of God and its interpretation of the facts is shallow. Thankfully, the New Atheism repeats old arguments that have been answered repeatedly, projects a pretense of morality that hangs in mid-air like a magician’s levitation act, often gets its facts backward, and is presuppositionally unaware of its own foundation. While accusing Christians of irrationality, the New Atheists commit logical blunders of their own. In trying to show that biblical religion conflicts with empirical evidences from historical science, archeology, historiography, and textual criticism, they seem to forget that the debate isn't over the facts. It's over the interpretation of the facts. Facts are mute. Facts alone don't speak for themselves. They are interpreted by their interpreters’ worldviews.

Worldview discussions require comprehensive knowledge and skill often beyond that attainable by people educated only in a secularized, government-controlled system. But fruitful discussions between Christians and honestly seeking unbelievers can happen when they focus on specific straightforward questions. From his research on the kind of objections the New Atheists have popularized, Furches has assembled a mass of apologetic details with which to meet this challenge. He provides wise advice on when to question, when to listen, and when to talk. He gives the reader sample conversations to follow that help to avoid being endlessly diverted from the core of the gospel.

This volume stands in the tradition of empirical apologetics. It will guide the reader in dealing with the common and often ignorant conjectures thrown out in public conversation such as the supposed unreliability of the biblical text when other ancient books with far less textual evidence are casually accepted without question. This handy work ought to encourage believers that the Christian faith is rational, factually based, and able to withstand the closest of examinations. Furches is to be commended for his emphasis on the centrality of the Lord Jesus Christ and His resurrection. After all, if faced with death with which historic religious leader would one want to converse about what lies beyond the grave?

Shall Never Perish Forever: Is Salvation Forever or Can It Be Lost?

by Dennis Rokser; Endorsement (below) by Charles Clough

This book is a valuable tool for counseling the many believers who have become confused about their assurance of salvation. Pastor Rokser gets the reader right into many specific Scripture passages including the so-called problem passages. He clarifies the difference between forensically perfect justification and subsequent variable sanctification; between objective security and subjective assurance. A loving pastoral spirit permeates the book with homey illustrations and helpful diagrams. Highly recommended especially for those believers struggling with life-dominating sins.

An Introduction to the New Covenant (Tyndale Press)

Anti-dispensationalists repeatedly insist that dispensational theology offers no purpose for the church Age that truly advances history toward the Kingdom of God. They infer this largely because on prophecy charts the Church Age is often depicted as a parenthesis. But that parenthesis is part of a chart that depicts Israel’s historical destiny; it is not a picture of what the Church is doing. Back in 1967, Mr. Clough wrote an essay on the purpose of the Church Age and the political implications for a class taught by Dr. John Walvoord at Dallas Theological Seminary. In 2013, Dr. Christopher Cone of Tyndale Seminary was preparing a book on a dispensational interpretation of Israel’s New Covenant to show distinctions between Israel and the Church implied in the texts concerning that covenant. He asked Mr. Clough to write two chapters in the book entitled, “Socio-political Implications of the New Covenant” and “Historical Progress While the New Covenant Awaits Implementation.” These chapters show clearly how the Church in this age is building the basis for the return of Jesus Christ to Israel and establishment of His global, visible Kingdom. This book can be purchased from Tyndale Seminary Press.

Due to a very successful campaign waged by certain activists, the traditional Judeo-Christian concept of marriage as a divinely designed relationship exclusively between one man and one woman has been virtually criminalized. Expression of that concept in the public square—whether in school, in government agencies including the military, and in business—now meets with overwhelming disdain and even judicial punishment. Underlying this action by civil authorities is the assumption that marriage is merely a social construct that can and ought to be changed in response to public opinion. Thus two mutually contradictory notions of marriage—a mutable social construct and an immutable divine institution—appear in the wedding service when the pastor or other church officer pronounces the couple man and wife while acting as an agent of both the state and the Lord Jesus Christ. The proposal put forth in this document argues that Bible-believing churches in those civil jurisdictions which have written the biblical view of marriage out of their law must now respond by separating the civil portion of marriage from the ecclesiastical portion and eliminate it from the wedding service. The wedding service itself must now include a robust public defense of one-man-one-woman marriage based upon God’s design. Appendices supply suggested topics to include in such a defense, a letter of official notice to the state government officials of the church’s new wedding procedure, and a sample exchange with government authorities over this matter of marriage. This book can be purchased from Tyndale Seminary Press.